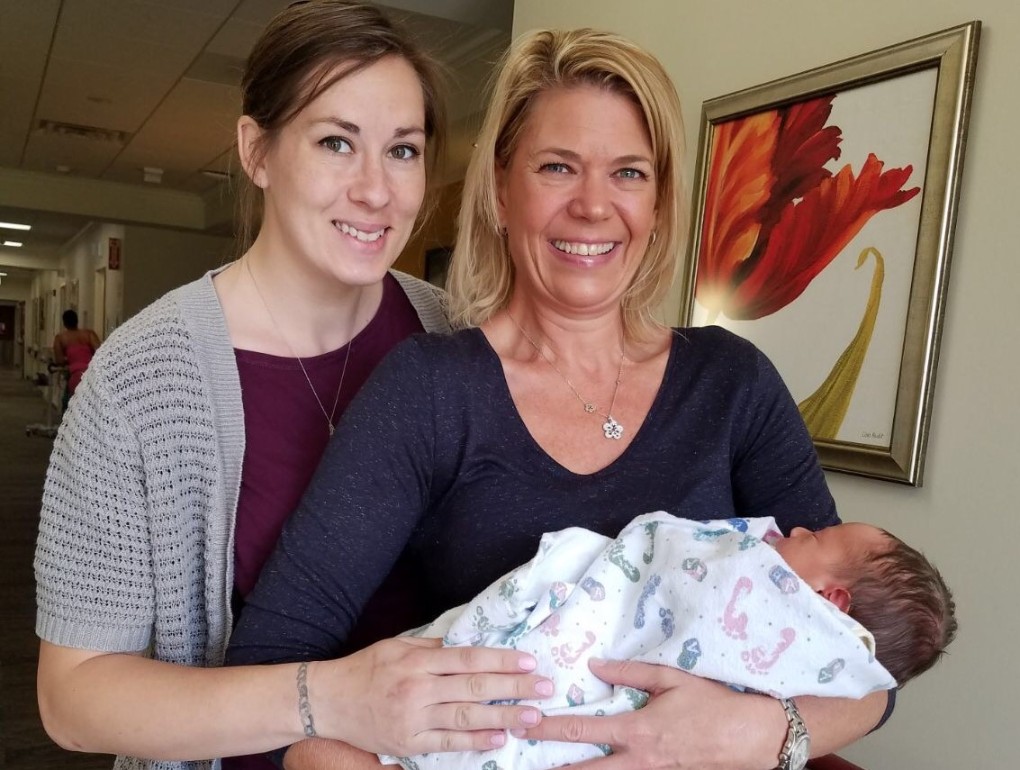 How to tell your child about surrogacy

Sali, Founder of Sensitive Matters, shares extracts from her diary about her incredible gestational surrogate, Jillian.

Sali needed a way to explain both a donor egg and the amazing Jillian to her son, so she created  The Magic of You.  This customisable book is now available online – parents upload photos to create avatars for the characters in their story and can edit the text to ﬁt their family’s own set of circumstances – whether that’s IVF or IUI; donor egg, sperm or embryo; traditional or gestational surrogates; and families with straight, gay or single parents.

We have a teleconference with an agency that sources surrogates. It seems that it works a bit like a dating agency - but matching intended parents with potential gestational surrogates rather than dates. They run a very rigorous surrogate screening process, only accepting women that meet stringent criteria e.g. you must have at least one child of your own. This makes sense to me.

We’ve been sent a profile for a gestational surrogate named Jillian. I like her - she's sporty and has three children. Her fiancé is very supportive of her decision to be a surrogate. I think we should take this further.

We’ve now selected a donor.  We only have pictures of her as a child and information about her and her family medical history. She is otherwise anonymous.

I say to Chris, “Our child could be conceived today!” and he says, "You know, I was just thinking that".  We have a little shudder of excitement at the thought. We’ve not felt this before with any of the other embryos.

Had a counselling session with Jillian and her fiancé and the psychologist - and meet Jillian in the flesh for the first time. It went well and we all seemed to agree on what would happen in various scenarios. We all agree that we will be honest to an eventual child about their origin. The doctor tells us we have only one embryo that is good. Chris and I feel deflated at this - how have five eggs become just one good embryo from a donor in her twenties? The doctor reminds us that it only takes one.

Returned home to discover that my orchid, which has stubbornly refused to flower for three years, has a flower spike! This is a positive omen.

Our single good embryo is transferred to Jillian today. We are hopeful but don't really expect this to work - we are accustomed to failure and it doesn't pay to get your hopes up, yet something feels a little different this time. The embryologist reckoned this was a brilliant embryo. God knows what they look for - it looks like all the others. Now we wait.

Jillian is pregnant. She sends me pics of a pregnancy test on WhatsApp. I don't want to believe what I think they say, so go back to her for clarification. She confirms: the test is positive! We're happy, but it's way too early to celebrate - we've been here several times before.

Jillian's HCG levels are more than doubling. The fertility nurse sounds so confident – she doesn’t say it, but leaves me in no doubt that she believes this pregnancy will result in a birth. I've known her for so long, and she’s always managed to stay positive, but she's only really ever had to deliver bad news to us. I've never heard her sound this buoyant. It makes us dare to hope.

Jillian has the first scan. She sends us pictures - there really is a little something there. We’re still finding it hard to believe. A baby. A real baby.

Jillian has another scan. Wow! the little peanut is growing. We’re starting to admit to each other that this may really happen.

We attend the 14-week scan. Jillian's looking great, although she hardly looks pregnant. Chris holds onto me and I grip Jillian's hand tightly as we listen to the heartbeat - oh my god, the baby's real! We feel slightly overcome, yet Jillian remains so calm. The operator spots something and says, "Oh, look at that. I think it's a boy. We can't tell for sure until 20 weeks, but I'd be very surprised if I were wrong". She labels the scan picture with an arrow pointing towards the tell-tale bit of anatomy and writes ‘boy?’. It looks like we're having a little boy!

We head over to Jillian's place and hang out with her and her family. We take presents for her kids. The point is that when they ask where the baby went, Jillian can say to the little ones, "He's gone to live with Sali and Chris". We know from our psyche session that it's important to think about how the surrogate’s kids will react to the baby not being with them after his birth - children can have nightmares worrying about the safety of the baby.

The gender is confirmed - it's a boy! Jillian texts, "Little peanut is growing! About the size of a banana in length and about 9oz in weight! Heartbeat 153". One of the scan pictures looks like an alien. I send it on to Chris (he's away for work). He agrees it looks quite scary! We're getting so excited now, we're halfway there.

We attend the 28-week scan - it's definitely a boy and now we can settle on names. We have a lovely steak dinner with Jillian and her fiancé. There's so much to get done before the 15th April due date!

We’ve picked a name! It wasn't really that difficult. We both had a list of our top three and we both liked Max - so that was easy to agree on. Wow. Max.

Jillian sends new scan photos. OMG! it's a real baby and we can see his face! It's hard for us to get our heads around the fact that this is actually happening.

Fabulous romantic dinner for two. We spend the whole evening talking about Max and making plans for the future.

I order a kit so we can collect blood and tissue from Max's chord. In the future, the stems cells could save his life or help after an accident. The science isn't quite there yet, but Max will grow up when the use of stem cells and gene therapy is a reality. We think the cost of collection and storage is worth it.

We build the furniture in Max's room. It's starting to feel real now.

Jillian texts me "I am completely filled with joy we’re going to be meeting Max soon! This time has gone by in a flash! I think he’s going to be a calm baby for you! His movements are strong but relaxed, my kids were like ninjas in there and still are!"

The monkey wall stickers are up and now the spare room looks like a baby's room. We're ready for you Max.

Jillian is having Braxton Hicks contractions. She says her body is preparing itself for delivery.

Scan update from Jillian: Max is weighing in at 7 lbs 3oz already! He's also growing some hair! The ultrasound tech could see his little fuzzy hair on the monitor today!

Induction is set for Monday at 6am. We go out for sushi dinner with Jillian and her fiancé. I ask Jillian how she would like us to refer to her when we talk to Max about her. I ask if she would mind being called "auntie Jillian". I explain we use the term ‘auntie’ for all close friends and family and Jillian confirms that she’d be delighted to be known as auntie Jillian.

Countdown. Just two days to go. We’re working hard to get all our work done before Max arrives.

We arrive at the hospital. Jillian is on the Pitocin already and feels fine. Her fiancé, Chris and I sit with her most of the morning and afternoon, chatting and laughing.

8pm and things are happening. Despite the epidural, Jillian is in pain. I hate seeing her like this and it makes me cry - she is, after all, suffering this pain on my behalf. At last the doctor says, "You're ready to push, it's time". Then everyone mobilises – the doctor orders the bed split and nurses break the bottom half of the bed away, whilst stirrups come up from the side. The doctor, much to my and Chris's alarm, dons big plastic boots and a plastic gown. A plastic mat is laid at the base of the bed under the stirrups. Both the doctor and the nurses exhort Jillian to push. She strains and pushes then rests for a few minutes. This goes on for some time, and I am incredibly moved by her braveness and fortitude. Her fiancé is by her side, holding her hand and he too tells her to push. After a particularly big effort, the doctor reaches for a big pair of scissors and cuts Jillian. I find this horrifying but hope my face doesn’t show it. I have tears streaming down my cheeks as I live this vicariously. On the next contraction, doctor, nurses and fiancé all shout their encouragement and the doctor shouts that she can see the baby's head. On the next contraction, the doctor gets a hold on the baby's head and pulls. And then he's out. There is silence as we wait. From where I’m sitting, I see the baby in a sack - it all looks very blue. We hold our breath. They cut the sack and then we hear a howl. Chris and I look at each other and smile our relief - our son is born.

The delivery nurse brings him to me and I hold Max straight out the womb against my skin for half an hour and gaze into his newborn eyes - indescribable.

Max gets his footprints taken and we hold him.

A couple of hours after delivery and after we have fed Max a little, the awesome Jillian holds the baby she has just delivered for us. I hug her and thank her for doing this.

The first night was scary - he is so small and he makes so much noise when he breathes! The nurses come in at 4am and ask if we want them to take him for a bit - we agree gratefully. Burping him is difficult - he's such a bobble head! But we are enthralled.

Later we go and visit Jillian in her room next door.  I ask how it felt to carry the baby for someone else and whether it was hard having to give him up.   She explained that she thought about the baby as if she were carrying a very precious backpack for someone else that she knew she would take off one day.

Thanks to our amazing gestational surrogate, Jillian, we are now a happy family of three.